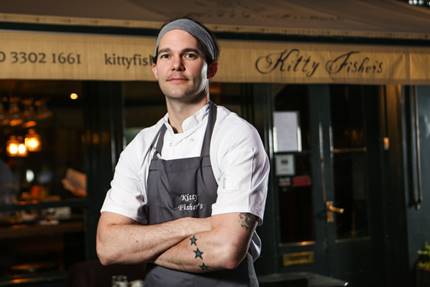 Kitty Fisher’s, the highly acclaimed restaurant in Mayfair’s Shepherd Market, has announced the appointment of George Barson as Head Chef.

Originally from Devon, Barson started his career at River Cottage and since moving to London has worked for several of the Capital’s top restaurants. Most recently he held the position of Senior Sous and Development Chef at Jamie Oliver’s Fifteen, prior to which he worked at restaurants including Dinner by Heston Blumenthal and Nuno Mendes’ Viajante.

At Kitty Fisher’s, his new menu will showcase the same relaxed, fuss-free food, all cooked over a wood-fire, for which the restaurant has become so well-known and loved.

Drawing on Barson’s experience at both fine dining and casual restaurants, some of his new dishes include: Silver Darlings with Piccalilli and Dill Salt; Devon Crab with Smoked Crème Fraîche and Pickled Rhubarb; Iberico Pork with Hispi Cabbage, Apple and Three Cornered Garlic; and Cornish Pollock with Leeks and Smoked Mussel Butter. The restaurant’s legendary Galician Beef remains a mainstay of the menu.

Kitty Fisher’s co-owner Oliver Milburn said, “We are thrilled to be working with George. His appointment as Head Chef at Kitty Fisher’s starts a new, extremely exciting chapter for the restaurant. His enthusiasm is infectious, and he’ll lead our kitchen brilliantly. Most importantly, our guests are going to love his cooking.”

George Barson added, “I am delighted to have joined the team at Kitty Fisher’s, and am very much looking forward to developing the menus and exploring my own style of contemporary British cooking, whilst also celebrating cooking great ingredients over a wood-fire, something that is at the heart of the kitchen and the wonderful reputation of the restaurant.”